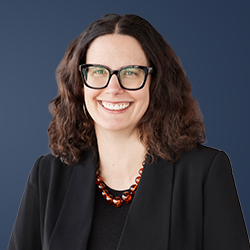 In 2019, Deborah was named an Employment Lawyer MVP by Law360 for her work leading the groundbreaking Title IX class action against Dartmouth College, as well as gender discrimination cases against Jones Day and Morrison & Foerster. She has also been recognized as a Benchmark Litigation Labor & Employment Star since 2018 and by Super Lawyers in 2018 (Rising Star) and 2020.

Deborah is currently Lead Counsel in Tolton et al v. Jones Day (DDC) a gender, pregnancy and maternity discrimination class action on behalf of female attorneys at the BigLaw behemoth. She also represents Plaintiffs Sherry William and Joshua Ashley Klayman in their lawsuit alleging that Morrison & Foerster engaged in a pattern and practice of gender, pregnancy and maternity-based discrimination against female attorneys, as well as retaliation against the Plaintiffs for reporting these unlawful practices.

Among her individual employment cases, Deborah represents the former Head of Americas Research at Cushman & Wakefield in a lawsuit alleging age and gender discrimination and retaliation by the commercial real estate behemoth. She also represents current and former female partners and associates at several of the most prominent law firms around the country in their individual and class claims of gender discrimination and retaliation against their employers.

As part of the firm’s Criminal/Sexual Violence practice, Deborah also represents students and professors at secondary schools and universities who have been victims of sexual harassment, sexual assault, other forms of gender discrimination and retaliation, in violation of Title IX and other federal and state laws. Deborah is Lead Counsel representing seven female scientists in their landmark Title IX class action lawsuit against Dartmouth College in New Hampshire federal court. Brought on behalf of current and former female graduate students and undergraduates in Dartmouth’s Department of Psychology and Brain Sciences (“PBS”), the lawsuit alleges that Dartmouth willfully ignored more than a decade of widespread sexual harassment and gender discrimination by tenured professors in the department. The proposed $14 million settlement in the case, which also includes programmatic relief valued at $1.5 million, was preliminarily approved by the Court on January 29, 2020.

Deborah regularly speaks on issues relating to employment discrimination and class action practice, including pay equity and the particular challenges faced by women in the legal industry. She is actively involved in the National Employment Lawyers’ Association, where she serves as Co-Chair of the Class and Collective Action Practice Group. Deborah has co-authored Supreme Court amicus briefs on behalf of women’s rights organizations and individuals in Mach Mining v. Equal Employment Opportunity Commission, and on behalf of LGBT student organizations at undergraduate, graduate, and professional schools in Obergefell v. Hodges.

Prior to joining Sanford Heisler Sharp, Deborah was the founding head of the City of New Haven’s Reentry Initiative as an Arthur Liman Public Interest Fellow. She was awarded the Frances Wayland Prize for her work with the Jerome N. Frank Legal Services Organization at Yale Law School, where she represented incarcerated individuals and persons in immigration detention. Before becoming a lawyer, Deborah studied religion and moral regulation at Duke University, where she received a Ph.D. in Religion.